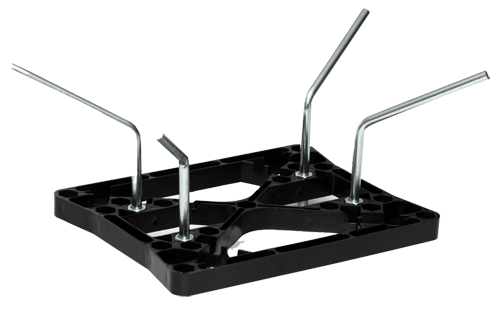 Bunker Seguridad, manufacturer of perimeter security systems based on infrared towers and photoelectric beams or active infrared beams (AIR) develops PTFB accessory which is used to fix perimeter towers, PT industrial type, to the ground and this way achieve extra fixing.   In order to achieve better fixing for IR towers and to improve perimeter system structure’s stability a concrete cube of at least 40cm3 should be prepared and buried in this support - with the screws’ threaded part left outside, which is where infrared towers are to be fixed. The above mentioned cube should be bigger and it should be fixed to the ground with additional reinforcements, rods or similar if the terrain is not very solid: this means that the fixation surface becomes bigger.  A good base is the key for good perimeter security system’s functioning - based on IR towers - given that it reduces vibrations and IR towers’ possible movements due to strong winds: it gives more stability to the IR photo beams.